Is Nurse Burnout on the Rise? Startling Statistics on Nurse Well-Being 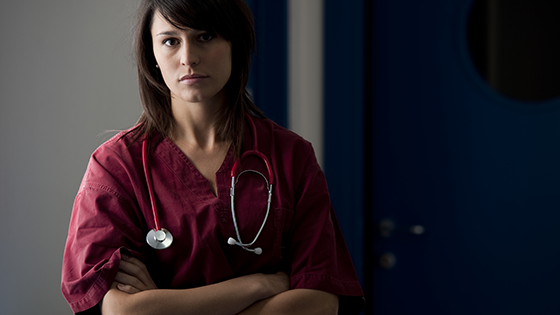 Nurses fill many roles at the patient's bedside: caretaker, educator, interpreter for the doctor's guidelines, emotional lifeline, and more. So, it's little surprise that nurses are prone to mental, physical, and/or emotional fatigue. But if that fatigue turns into exhaustion that doesn't go away after a short rest, it may be burnout.

The term burnout was originally coined in the 1970s to describe the consequences of severe stress and high ideals in the helping professions, but it's often ascribed to overwork or poor working conditions as well.

Nurses suffering from burnout show many signs and tend to be so fatigued that they struggle to cope or perform normal job duties. They may feel alienated, emotionally distant or numb about their usual activities, and both job satisfaction and job performance may suffer.

BUT FIRST: Everything you've ever wanted to know about nurse burnout.

Nurses all over the country experience symptoms of burnout. Regional studies have shown discrepancies in burnout levels between areas; however, national surveys verify that nurse burnout is a nationwide concern.

It's also important to consider the specialties in which nurses feel the most burnout. High-pressure jobs will undoubtedly bring on more stress and fatigue for nurses, not to mention the trauma that can occur on a daily basis in emergency units.

According to a 2013 report from the Department of Professional Employees, almost half a million registered nurses had already left their profession nationwide. Many of them cited high workloads and limited staffing as reasons for their departure, and more than 60 percent of the nurses surveyed reported being forced to work "voluntary overtime." In the same report, about one-third of nurses surveyed reported an emotional exhaustion score that qualified them as "high burnout."

The working environment can also have a drastic effect on burnout. A massive analysis of nationwide survey data showed that rates of burnout and job dissatisfaction tended to be highest for nurses that were providing direct patient care in hospitals and nursing homes (34 percent of hospital nurses and 37 percent of nursing home nurses reported feeling burned out).

In a 2017 study done by Kronos Incorporated, 257 registered nurses working in U.S. hospitals were surveyed. The following statistics were uncovered:

Where you live matters, too. In a 2010 study, 36 percent of nurses in Pennsylvania reported burnout, while only 29 percent of California nurses reported the same. The good news is that this means you can make a difference by adjusting office or hospital policies to give nurses mental, physical, and emotional safeguards against burnout.

A study featured in the American Journal of Critical Care found that nurses working in high-risk are more "vulnerable to burnout because of patients' intense needs" and "uncertain outcomes." "The highly charged context of the nurse's work, particularly the impact of ongoing witnessing of suffering and death," attributes to

The nationwide analysis also showed that patient satisfaction correlates directly with nurses' job satisfaction. For every 10 percent of nurses at a given hospital who reported feeling unsatisfied with their job, patient satisfaction decreased by about 2 percent, even after other factors were taken into consideration.

Nurse Burnout Is Shrinking the Workforce

In a recent nationwide survey, almost half of the nurses surveyed indicated that they were thinking of leaving their profession. The leading reason for leaving was feeling overworked (27 percent). Add in the second-leading reason — a lack of job enjoyment (16 percent), which can also be a sign of burnout — and you've accounted for almost half the nurses contemplating their departure.

When paired with a projected nursing shortage that is already being felt in many cities across the nation, those statistics signal a troubling trend toward even higher workloads for those who remain in the profession. In fact, 62 percent of nurses report that the national nursing shortage is already strongly impacting them.

What You Can Do Now

The good news is that burnout is preventable — once you understand that it's a risk. We recommend using tools like the Well-Being Index for regular assessments of nurse well-being. It's also a helpful aid for locating resources that can help reduce burnout and measure progress over time.

You will get instant access to the Well-Being Index demo account to test the software as different types of users. We will also send you a confirmation email with the link to the demo account for future access.

Transforming the Approach to Well-Being.

Go Beyond Burnout at your organization. Use the Executive Leadership Summary to share the Well-Being Index with your colleagues or leadership teams.

The Well-Being Index team is made up of thought leaders, healthcare associates, technology experts, and content creators dedicated to improving well-being by equipping organizations with the tools and data needed to Go Beyond Burnout.

Save this article for later